It is probably one of the most popular cities to visit and for very good reasons. We were actually told that Kyoto was originally the capital of Japan. There is plenty to see and do and in my opinion was a more pleasant experience then when we were in Tokyo. A lot of people will tend to visit Tokyo which is understandable, its hustle and bustle and vastness will never cease to surprise you but if you are looking for a city which has a more cultural feel then Kyoto is for you. If I had to choose between the two then I would have to choose Kyoto.

These options are similar to what I mentioned in the Osaka blog and they are vast. Again we decided to stay in an Airbnb which was very good but once again I would recommend a ryokan experience as part of your japan trip.

We didn’t actually stay in Nara but took the train to do a day trip there, it is a fairly small town and it is likely you would have to either stay in a hotel or hostel.

I was highly recommended by my cousin Li to rent a bicycle as the city is very bike friendly. Unfortunately Bev was not keen on the idea so we reverted to taking the subway and tried the bus. I think if you are travelling in a group then biking around would be good idea and definitely preferable to taking the bus. The bus was constantly rammed and I didn’t feel comfortable having my face pressed up against the windows! The subway is another good contender and is probably the most efficient transport, although more expensive than the other options, you don’t have to worry about missing a subway as they are so regular and space is more abundant. However with renting a bicycle, you have to make sure you know where the shops are, you may live in a part of Kyoto where the bicycle rentals are a bit out of the way and some shops may want you to return the bikes at a certain time but it is a cheaper and healthier option, also a very good way to explore the city. I believe I saw a shop which advertising bike rental at 800 yen a day, so expect average prices to be similar. 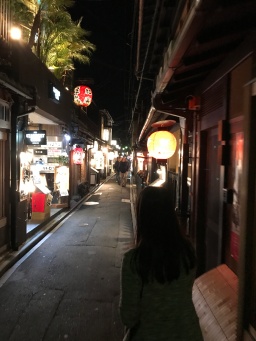 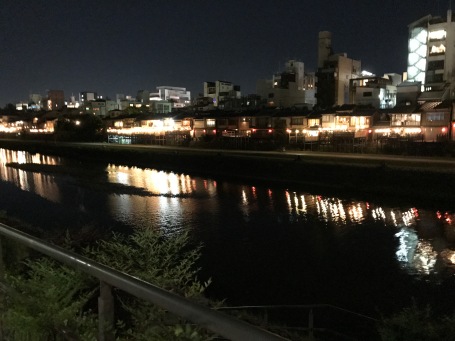 These are districts in Kyoto which are practically next to each other, I believe they are separated by Kamo river and are famous districts. Gion is well known as it was a Geisha district and there are still geisha shows which you can view if you want to. Here you can view shops, teahouses and geisha. Unfortunately we did not see any shows but if you are interested, we were told you can go to Gion corner and pay to see a show. However we walked around the area and you can see how different the layout is compared to the rest of the city; some cobbled streets and traditional houses can be seen.

Pontocho is another district which is packed full of yakitori restaurants and narrow alleyways. There are so many places to eat in this district. Some restaurants are very exclusive and require connections to get in and some dollar! Luckily we did try a yakitori restaurant, which was extremely cheap and really good if you fancy grilled foods and beer.

One of the most iconic sites in Kyoto and is famously called the golden pavilion. It is a Buddhist Zen temple which looks as if it floats on top of water. The silver pavilion or ginkakuji can also be found at another site but is not as impressive in my opinion. We were not allowed to view inside the pavilion and one of the downsides of visiting Kinkakuji was that there were so many people swarming the area that it was almost impossible to take a good photo of the pavilion yet along enjoy its view in silence. When you leave the premises you get the opportunity to purchase speciality items and matcha snacks.

This is the most famous site in Kyoto and it known because of its thousand tori, these are the red gates which lead to the Mount Inari. Inari is a famous god of harvest or rice and you may see plenty of fox statues which are associated with Inari. I read somewhere that each tori gate represents a fulfilled wish but other sources say a gate is donated and inscribed with the donors name and date of donation. I’ll let you decide which one your mind likes better.

Before you enter the shrine, you can purify your hands which is a tradition before you enter a Shinto shrine. So this is an area where you rinse your hands with water streaming from manmade taps and you have to do it in particular order! Unfortunately I messed up the first time and did it again. I think the order is hold the cup in the left hand to rinse the right, then hold in the right hand and rinse the left, and then hold the cup upright to allow it to drip down one arm, you’re done and pure!

Definitely worth the visit, there really isn’t anything quite like it. However be warned, there is a lot of walking and at this point the blister on my middle toe wasn’t helping me. We decided to walk to the shrine but you can get a train there.

You have to go!

A very beautiful castle and it was extremely vast. Itokugawa Leyasu resided here and was the first shogun. There was a recommended path which led us from Ninomaru palace through to the garden and Honmaru. We were allowed entry into the castle and was really insightful, every feature had a meaning and was thought out. For example, the wooden floors creaked simultaneously which was supposedly to give the illusion of a birdsong, the ceilings are highly ornate and the wallpaper also to give the sense of luxury and the tatami flooring also has different heights to convey importance – a shogun may be on a higher platform when speaking to others.

If you are into history and royalty then you will enjoy this, I would recommend reading up some of the castles history before going so that you can enjoy some of the hidden features when you arrive.

We had to travel a bit to get to this area and I really wanted to see the monkeys! If I am honest it wasn’t anything special, you climb up to the top of this hill where there are a lot of monkeys running around and you can enter a shop where you can purchase monkey nuts and fruit for the monkeys to eat. However the novelty wore off pretty quick, the bamboo park gives you spectacular views and almost fantastical, gave me a bit of Hidden Dragon Crouching Tiger vibes.

The other sites we visited were the international Manga museum and Nishiki Market. These two sites are closely situated together and we visited the museum first then went to the market to grab food/snacks. The manga museum is open every day from 10am-6pm except Wednesdays, entrance fee is 800 yen. It details the history of manga and hallways full of manga which you allowed to read but the majority are Japanese – there are few which may be in English or other languages in the entrance hall. It was a nice visit but you aren’t allowed to take any photos, a shame because there were some cool exhibition halls, the best one was  a room which was full of hand sculptures of manga artists and their signatures/doodles.

Nishiki market is not located far from the Manga museum and mainly sold food produce. It wasn’t uncommon to see stalls freshly grilling and selling food to eat. Me and Bev tried some king prawns and chicken skewers, both were so so good. We didn’t spend long here as they are quite similar to markets found in Asian countries and so it felt familiar, however if this type of site interests you, then you can go look and also have a bite.

We decided to go for a day trip to Nara, it is south of Kyoto and boasted roaming deers and Todai-ji temple. Would I recommend it? Yes, it was really nice and quite romantic for couples. You can purchase deer cookies to feed the deers and leisurely walk around. We activated our JR pass on this day to travel to Nara but I think the return ticket to Nara was 2000 Yen or maybe slightly more.

There were temples you can visit and also a buddha museum nearby which was quite interesting. It detailed the origins and meaning/ role of each buddha. I would recommend one day in Nara, two days would be more than enough.

When we arrived in Kyoto, Bev suggested we go to Sushi no Musashi, there are two branches I think in Kyoto but one is located in main JR kyoto station. Usually you may have to queue for 20-30 minutes but we were very lucky as we went for lunch. It was a dream, cheap and fresh sushi! I think we managed 27 plates!

So this was a snack before dinner, why snack before dinner you ask? Well, we decided to go to a ramen house which was well renowned in the area but I think alot of other tourists had the same idea. We ended up queueing for 1.5 hours and so I ventured out to snack on a takoyaki variety, cant remember the different flavours but all were delicious! 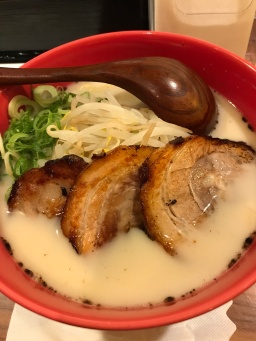 The above picture is the ramen house, Sen No Kaze. A small bar stool restaurant, the owners spoke very good english and had cool jazz playing in the background. I was expecting huge amounts of flavour and I was starving and the chef didn’t disappoint. The ramen was slightly different as they fried the chashu slices, added chunk of white floating matter which I believe was pork backfat and a black oil which I was informed was black garlic oil! The broth was delicate and not overpoweringly rich. The picture speaks for itself, it was worth the wait. 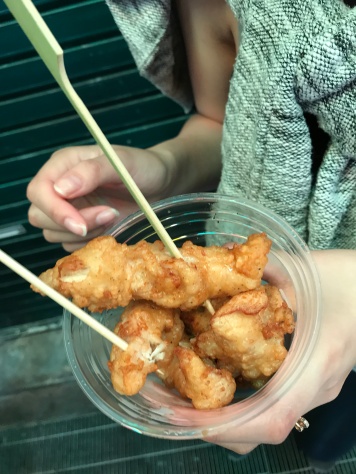 Look at those prawns! Fresh prawns grilled in front of us and the stall owner seasoned it with some sort of umami dry spice, I remember the juice exploding from it when Bev bit into one of the prawns. We both had two prawns each of course! We then tried chicken karage, again very succulent.

We also went to a yakitori place in the Pontocho district, we entered and it was bustling. We got seated and they explained that to order we just tap on the screen and order what we like the look of. Beware vegetarians, this will not be the place to eat for you guys. Vegans, avert your eyes. They specialised in chicken yakitori but had a few specials like chicken karage, potato salad and there were alot of people socialising here and drinking beer.