I have returned from my travels and I wished I had travelled for longer. If I could give any advice to you young folks, travel for a few months then get ready for the daily grind. Unfortunately when you have to work and pay the bills, life doesn’t seem as adventurous. A lot of people asked me why India, but rather than replying “why not”, it was because I always wanted to go, from a lot of pictures I had seen, India seemed busy and full of culture. Would I return, yes but for me personally I would go to a less busy part and explore more of the natural beauty it has because the city life was very very busy.

So as much as I wanted to book an Airbnb, my travel companion was scared that it might be dangerous. So we stuck to the good old fashioned hotel. There were plenty of options available and the prices vary from cheap as chips to sell your organ expensive. We decided to go mid range and book three-star hotels, as they were still cheap but guaranteed that it would be semi decent, or so we thought.

The trip first began in Mumbai then we went up to Delhi and had a daytrip to Agra and Jaipur. So we did a lot of research into hotels. They literally ranged from £2 a night to £300, so the range was decent. I still can’t believe you can get a room for £2 a night, literally a bargain deal but we didn’t go for it.

We decided to stay in Andheri East area which is close to the airport and I think this is still a good place, however make sure you have a transport link nearby so it makes it easier for you to travel to South Mumbai where most of the sites are.

Gate of India and Elephanta Caves

So on our first day in Mumbai, a random local approached us and welcomed us to India, his name was Babolu. He seemed initially like a nice chap but I think we went down a bit of a rabbit hole. He showed us around some sites, St Thomas Church, Chhatrapati station, Dhobi Gat and Jehangir gallery. Initially he said he just wanted to help us out as he could see we were tourists and that if we wanted to, we could buy him a beer as a gesture. Initially I thought it was abit fishy but I wanted to see how it played out. Luckily I’m sat here writing this and escaped! After we saw some of the sites, he began asking for money to buy an English book which amounted to £30, although it doesn’t seem much, it was a big chunk out of our daily budget. We gave him £10 and we went on our way but in hindsight, I think he was trying to shark us! The moral of my story is that when in India, do not trust anyone.

The gate of india is one of the most popular sites but it is more of a photo opportunity then a site filled with things to do. However, the ferry to Elephanta caves is located here. If you are travelling via train then you must head to Churchgate, as it is the last stop. The train tickets are usually 20 rupees return, you could get away without paying for it but there are sometimes random checks and a 500 rupee fine. Be careful though as a lot of vagrants will pester you in the queues and you will just have to ignore them as they will always ask for more.

So the gateway of india is a great symbol for Mumbai and a great photo opportunity but if you venture towards to dockside you can purchase a ticket to go to the Elephanta caves which I would highly recommend. It is a ferry ride away from South Mumbai to Gharapuri Island, you will spend roughly an hour on the ferry then pay a small entry fee to the island and a more substantial fee to enter the caves (500 rupees). The island has a long stretch of street stalls where you can buy souvenirs or even have food. The caves consist of several chambers which have relief carvings of Shiva. We decided not to get a tour guide but in hindsight I would have liked to, if you do get a tour guide bargain for the price. They will always give you a sky high price so aim to cut it right in half, don’t feel obliged you have to take it if they give you some money off, once you walk off and have a look around they will drop their prices.

We were shown the famous train station by Babolu, he gave us some history about the station and mentioned that the station was so heavily guarded now because there was a terrorist attack in 2008. The station itself outside and inside is beautiful and it was constructed when the British colonised India and that it why it has distinct gothic features. There are some famous street stalls located near the terminus, so if you take the train to/from here then maybe you could have a bite too. I also wanted to mention the Rajabai clock tower which is part of Bombay university grounds and is another beautiful structure. We didn’t get the chance to go into the clock tower but if it is possible then it may be worth going.

We decided to go to the national park on the second day, which is where Kanheri caves are located. It was quite difficult to get to as it was far but my advice would be to take the train up to Borivali then to get an Ola (Indian Uber) or a tuk tuk. If you get into any tuk tuk or taxi – AGREE THE PRICE, do not ever get into a taxi and go on the meter, they will fleece the hell out of you. The tuktuk driver agreed a price of 50 rupees from the station to the entrance of Sanjay national park but then said it was 50 rupees each! What! We paid him 50 and left it at that.

The national park was extremely tranquil and very beautiful, a lot of greenery and you could spend a whole day there. There was even a man serving chai tea on the side, avoid the cut fruits though as you might be getting a case of Delhi belly early on in your adventures. When you walk through the park, you get a chance to see a lot of the natural wildlife but some days the sanctuaries may be closed, so research beforehand. 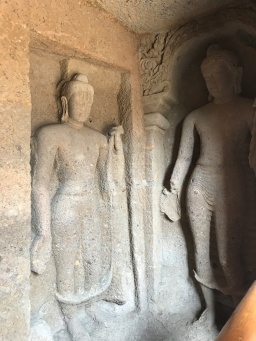 We then began our trek to Kanheri caves, I think the bulk of my blisters from the enlightenment trip was from this walk. Seriously, consider taking a coach to the caves because the walk is long and extremely humid! The caves are immense and are almost endless, again these are hand carved and also have relief carvings. They say that it is a Buddhist site and that a monastery once existed there, again I would recommend a tour guide for the right price. 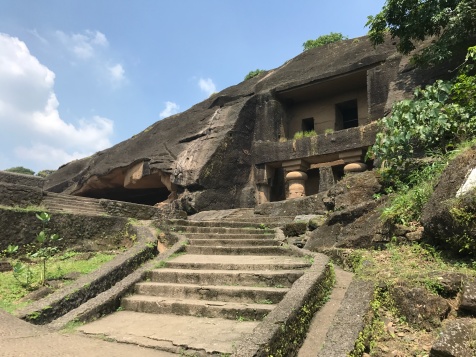 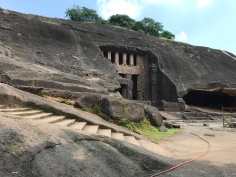 Marine Drive and the Hanging Gardens

Towards the end of the trip, my travelling friend went to meet some locals he had met online and so I was left to wander alone. I decided I would take a relaxed walk along Marine drive, it was nice but the humidity is immense. I decided to walk from Nariman point to the Hanging gardens. If you are thinking the same thing, don’t. Walk along marine drive then get an Ola or Tuk Tuk to the top of the hill where the gardens are found. The gardens are quite a family friendly and romantic destination, it is very peaceful.

This is located northwest of the Mumbai and it is found in the same area as Esselworld, so if you wanted to combine the two activities, you can. The pagoda is stunning and it is a replica of the same pagoda found in Myanmar. I believe you have to travel up to Borivali and then we decided to get an Ola to the docks where you get a ferry across. The structure itself is amazing and I think you can enrol in meditation classes at the pagoda also, which are free.

Man oh man, did we eat. When food costs £3 for a curry and dhal is 50p, you can eat like a king everyday. We ate like kings for weeks but I would recommend setting a budget and make sure if you seeing a site to have a large breakfast or a lunch place in mind because some days we missed lunch because we travelled so long to see sites that we skipped it and ate big for dinner. Alot of restaurants look quite basic and we went on the principle if it looked good, was busy then we would try it out. Also used tripadvisor too.

Next up we went to Delhi Darbar, which was located near the Gate of India. We wanted to go to a nice restaurant and this was so good. We had chicken saag, lamb biryani, vegetable curry and rotis (roomali was good).

We went to a small restaurant which was highly recommended, I think it was called Idli. We shared a dosa and my friend had a parantha with chole. I had a thali as well, really cheap meal but wholesome.

Some of my indian friends recommended to try snack foods such as pani puri, falooda and the indian club sandwich. An american indian  I chatted to said that vada pav was his favourite street food and he wished he could freeze a batch to take back home. We went towards Crawford market where we located falooda (ice cream, yoghurt and noodles) and also the Indian club sandwich which was a vegetarian club sandwich with a spicy chutney – I love my meat but this was decent. 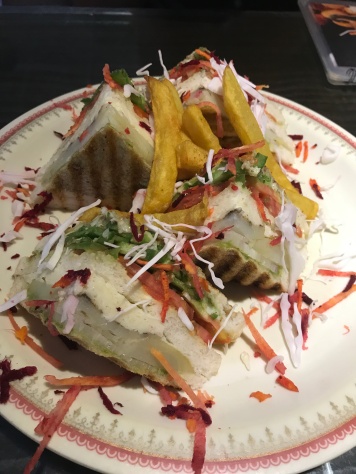 I thought I would also include some breakfast items that we had, as they gave us traditional foods such as medu vadas and batata vada. 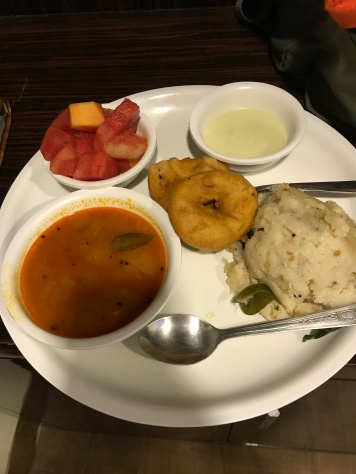 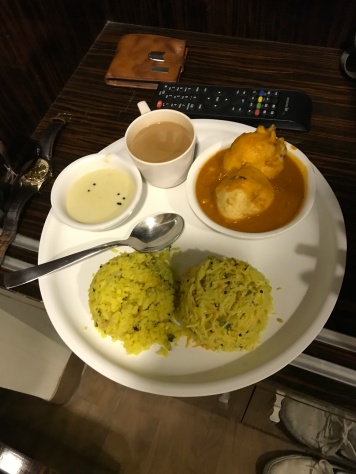 I wanted to include pav bhaji also, another very famous dish which is essentially a rich vegetable curry and bread. It can be eaten as a meal or a snack and it is delicious.

Little sauna trip and jump into Oslos icy waters 🤯
Dog sled!
What was once a slum in Busan, was transformed into what they call "Koreas Machu picchu". Although Gamcheon village is very touristy. It's worth the visit!
Day out on Nami island!
Windmills for days!
Cloudy and rainy day at Ha Long bay but still an amazing time.