We spent 3 days in Mumbai initially then moved onto New Delhi for one week. It is kinda weird but New Delhi looked small on the map, but it’s huge. I remember going from one site to another and I almost collapsed because they were far! New Delhi was very interesting and I felt there were more sites to see but it felt extremely busy in Delhi compared to Mumbai. A lot of locals in Mumbai did say to be abit more careful in Delhi because the city people may try to be cheeky especially if they know you are a tourist.

So we stayed in a budget hotel, the reviews raved on about this place and I was thinking this is the place. We got to Delhi and went straight to Hotel Amax inn and it was literally down a side alley. So everything looked good from the reception, warm welcome and pleasant chat with the owner. They offered us the chance to choose which room we wanted and I was thinking, maybe this is going to be some sort of hidden Hilton hotel gem. So my travel buddy went and looked at the rooms, came down and he said “I chose a good one, spacious and looked the cleanest”, I gave him a pat on the back and we made our move.

We climbed up three flights of stairs and entered our room. It was like a scene from silence of the lambs, quite a bare room! Unfortunately, when it said it was a budget hotel, it wasn’t a lie. The room was fairly clean, the duvet was more of a throw and the shower was cold. If I’m being fair, the price of the room reflected the amenities provided and it was a bargain, however if you’re expecting luxury, spend abit more elsewhere!

This was a very majestic site and the history of this site is that the Mughal dynasty built the fort as their main residence. The main square is extremely busy and be wary of hawkers as they will bombard you with souvenirs. The fort itself is very grand and red, the walls themselves are made of red sandstone and once you enter through the main gate, you pass through a marketplace where you can buy souvenirs and then the inner grounds. 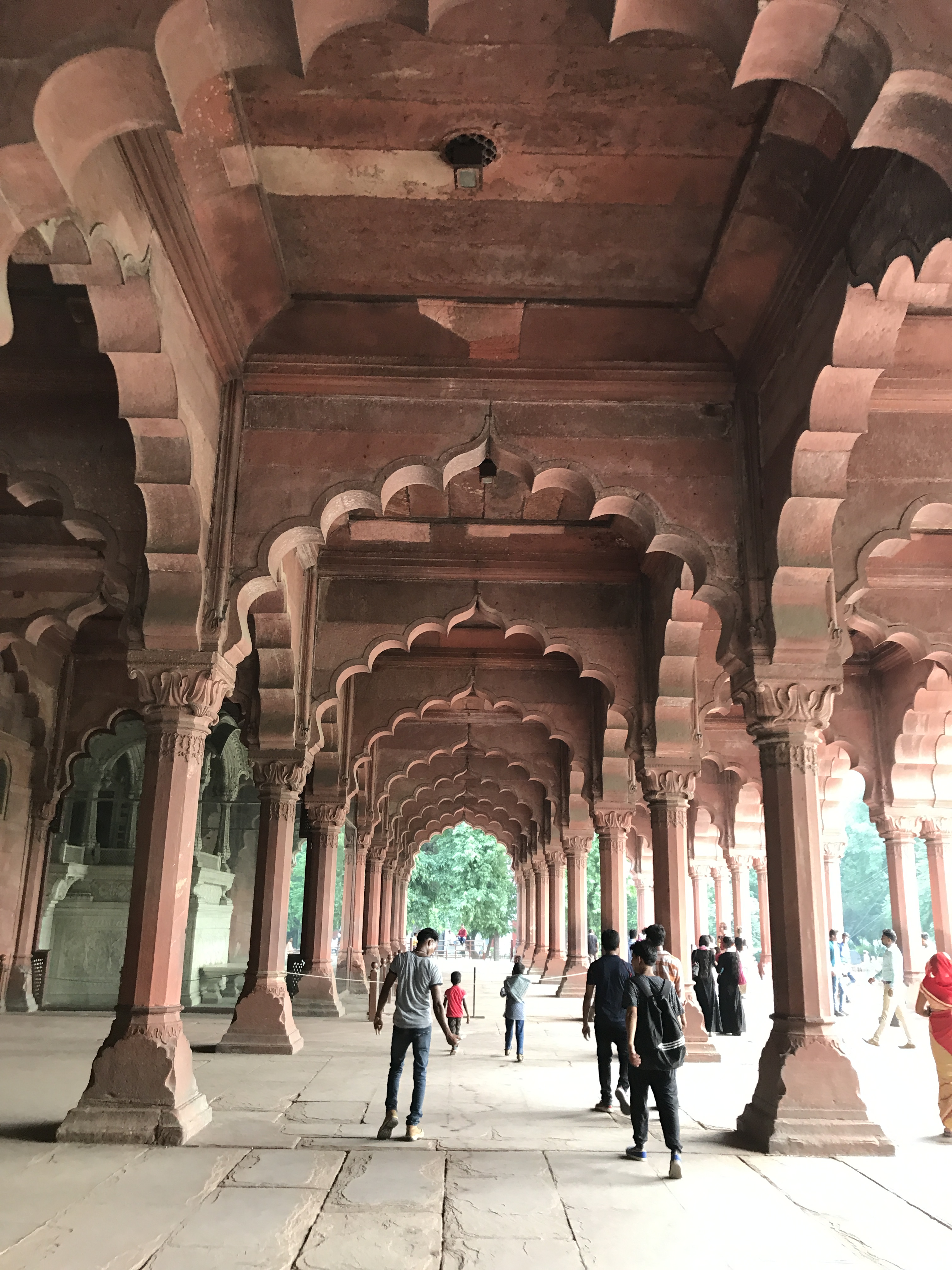 The fort itself is grand but I would recommend getting an audioguide so that you can learn about the history of the fort, unfortunately we did not and so we walked around the site for about an hour.

Qutub Minar is another complex which has Muslim ties, the tower is part of a series of structures found in the complex and you can see the tower from the city as it is so tall. The tower itself provides no function and locals say it is a monument to celebrate the first Muslim ruler in India. The cost to enter is 500 rupees for foreigners and 30 rupees for nationals. The structures themselves have relief carvings and you are free to move within the complex, again I would recommend an audioguide or tour guide but agree a fair price because they will try to squeeze the money out of you.

We also managed to see jama masjid which is a famous mosque near Chandni Chowk. Although the mosque was a very beautiful structure, the experience was not great. Initially we asked a tuk tuk driver to take us to Chandni chowk as my friend needed to buy some extra shorts but took us to a tailoring shop. We paid our driver and walked towards Chandni chowk but then saw that the jama masjid was literally next to us. Initially when we walked up to the mosque, they asked for an entrance fee and then charged me for a cloth to cover my shins as I was wearing shorts. A man then said that the mosque would be closing soon and so we only had 3 minutes to have walk around the mosque. After we were rushed around, the man then said that it would cost us 300 rupees for the tour he just gave us! The man didn’t tell us that he had given us a “private tour” and that he was charging us for it, I told him that he should’ve told us before that he was showing us around for a fee as we thought he was just a local being friendly. In the end we gave him a small amount and walked away – so my warning is either avoid the jama masjid or make sure you say you don’t want anyone to show you around.

We then walked to chandni chowk which was another experience, literally streets upon streets of shops. Shops selling books, shoes, toys, jewellery and food were everywhere, it was extremely busy and we didn’t find any shorts for my friend. I wouldn’t recommend going to see Chandni Chowk because it was extremely busy but as an experience it was very interesting, if you go as a group it may be better but as a solo traveller it may feel abit claustrophobic.

We also saw Humayuns tomb which had some interesting history and also Safdarjung tomb. Both were tombs with Mughal styles. Humayuns tomb houses the ancient tomb of Emperor Humayun and Safdarjung. There was not much information at the tombs but you are allowed to wander freely after paying the usual entrance fee, so I would recommend doing some research beforehand to fully enjoy the experience. Our taxi driver to Agra also referred to Humayuns tomb as the Baby Taj which I thought was quite cool!

This was pretty amazing, someone went to the effort of planning and constructing a temple which looks like a lotus and the result is amazing. The temple is of Bahai origins and is a large lotus structure surround by pools of blue water. The queue was pretty immense to enter the building and they request that you are quiet whilst inside and you can stay as long as you want to pray. I remember the temple being quite far away and me and my travel buddy took an Ola there which is convenient and more importantly, air conditioned! It is a definite must see destination but beware of taxi drivers as they will stalk you when you leave. 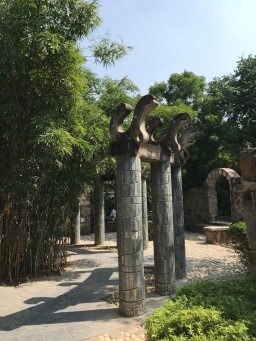 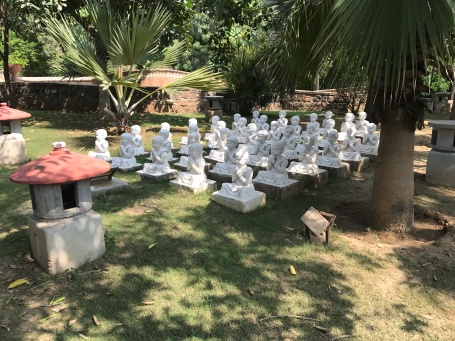 The temple is located literally next to the metro, likely akshardam station. The security going into the complex is very strict and they ask you to take a ticket and then stow your belongings and phone into a locker. They will not allow you to take any photos inside the temple. However this is probably the most beautiful temple that we saw in India, the path leading into the temple and up to the main complex was immense. The inside of the temple is something else, the inner carvings are extremely detailed and blew my mind that something like this was made with human hands. The entry into the temple is free which was a bonus and if you fancy an easy lunch/dinner then there is a food court located within the metro station.

I thought I would give the garden of five senses a mention as well, we actually went twice because when we first visited, it was closed! So we went back and had a wander, it was a very peaceful location and really ideal for couples, however it was quite pricey to enter the gardens so if you’re not a fan of garden/park scenes then I would say go to a different site.

Another day another temple, this temple is located near a metro station too. There were two different complexes, so there was a main praying hall on the right and on the left, you could see the temple complex which was very beautiful, the style of the temple is very square and almost pyramidal. Opposite the main complex there’s a bright red statue of Hanuman, again free to enter and look around, you literally can’t miss it.

So when we initially arrived in Delhi, the owners of our hostel offered us a package deal to see the golden triangle. This was essentially a city tour of Delhi, a trip to Agra to see the Taj Mahal and a city tour of Jaipur. The trip overall cost £100 including overnight stay in Jaipur, I would definitely recommend doing this but research and book it prior to your trip because I think then you don’t have to bargain for prices and go through the hassle of sitting for an hour debating with people. The trip to Agra was worth it because obviously you get to see the Taj Mahal but the queues are immense, our tour guide actually just cut through lines and sped the tour up a little. He gave a lot of details about the Taj such as that the two pillars either side are actually on a 2.5 degree incline away from the main mausoleum because if they ever did collapse then it would not damage the main complex and also that because the Taj was made from a special type of marble that it would refract light differently giving it different appearances at sunrise, sunset and at night.

Jaipur was a more quiet city and cleaner, however it was a rushed view of the city as we only had a few hours in the day to see everything then make our way back to Delhi. If you are doing a tour of India then consider spending at least two days in Jaipur and paying a visit to Jodhpur – the blue city. 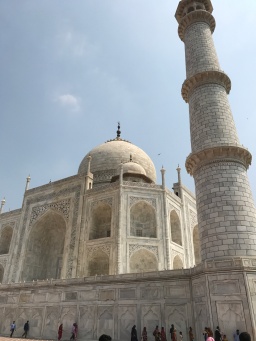 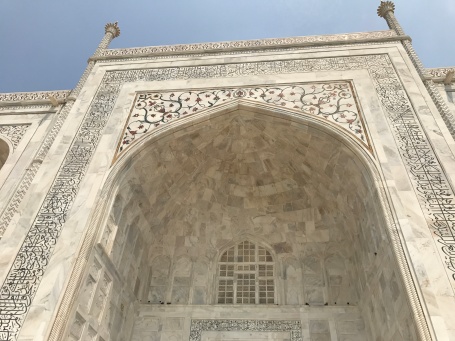 We had some great food in Delhi and man can we eat! We were dying for some luxury foods, so we went to a restaurant near India Gate called Gulati and it was so good. We had whole tandoori chicken to share, butter chicken, rotis and a vegetable curry then washed it down with some lemon tea. The food was so good and the service was great as well, overall the mean cost was about £27 which was on the pricier side but worth it. 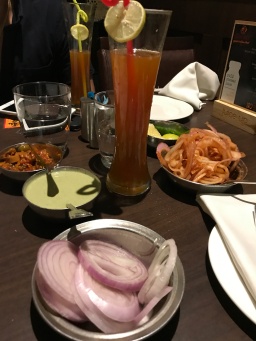 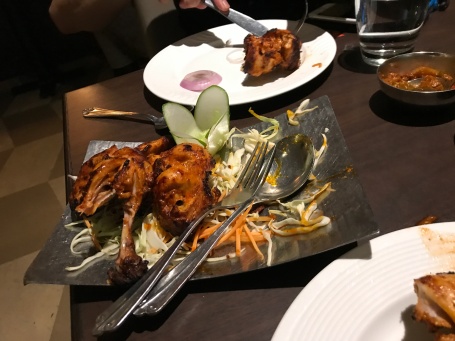 We had some more curries, different styles like chicken dopiaza and a mutton curry. Also had dosa for breakfast. Amazing food. 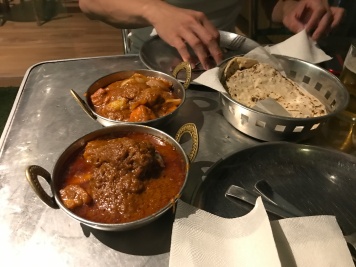 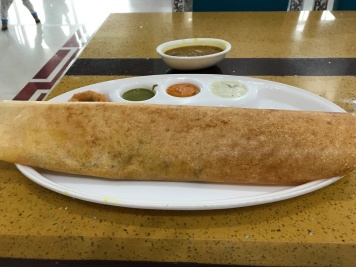 We had a tandoori selection in Agra, such a great meal. 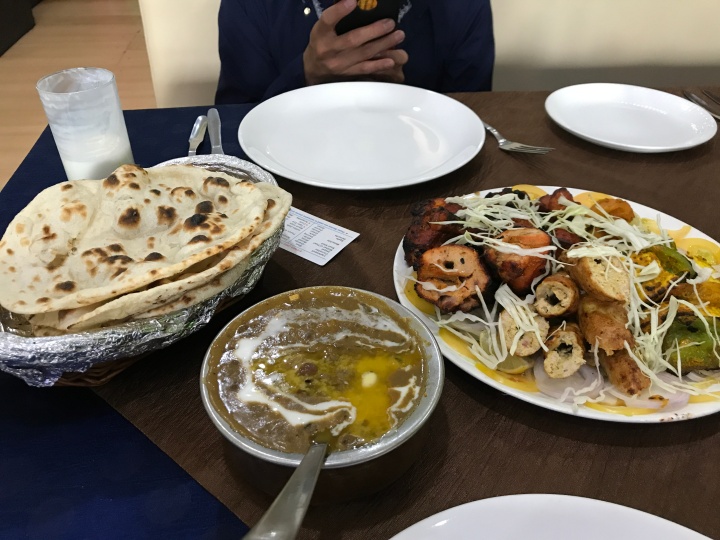 We also tried uttapam, which was described to us like an indian style pizza. 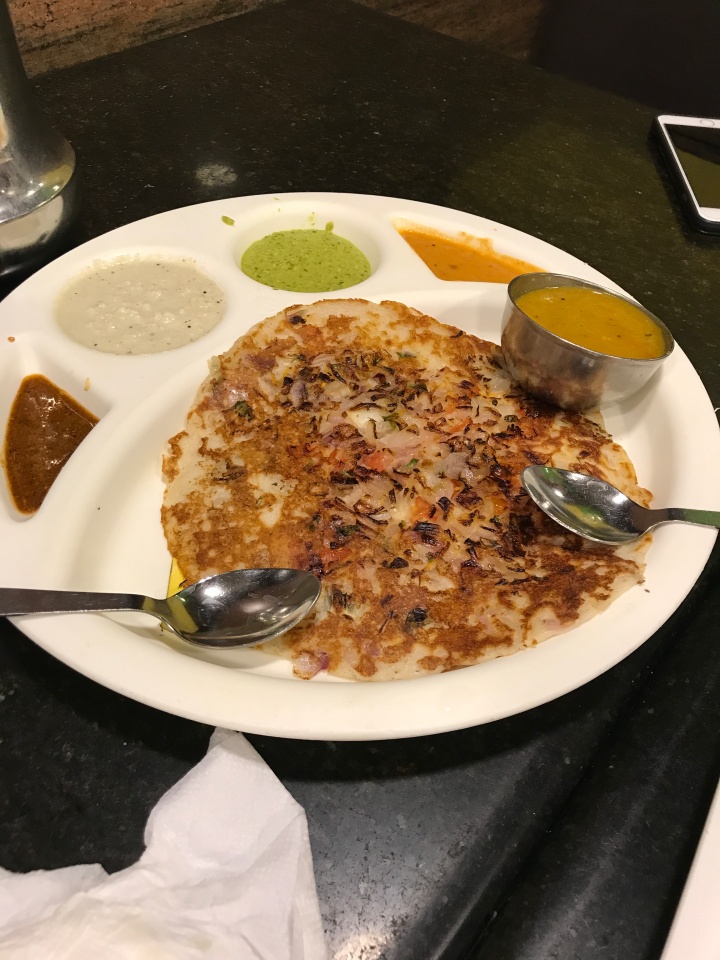 We tried a traditional Rajastani thali also, it was recommended by a local because it is different to the thalis usually found in the North 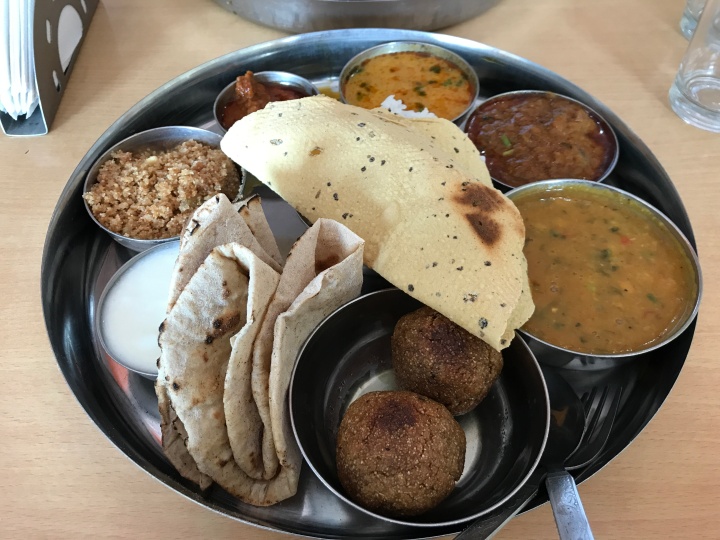