I was worried we wouldn’t actually be able to get into Tibet because the border control is very strict and China may choose to close the borders at any point. It is part of China but many Tibetans would consider it a separate entity. I usually like to plan things early or have a rough idea of what I am going to do. So this is what I did when I was planning the Enlightenment tour and Tibet was going to be the crowning jewel! The nirvana of the whole trip, I was thinking seven years in Tibet/ The Way back. So there are a few things you need to know if you are planning a trip to Tibet.

I didn’t check if we could get an Airbnb in Tibet, my feeling is that it probably is rare and as tour groups are almost mandatory that you are forced to stay into the accommodation provided. We stayed in a hotel which wasn’t bad but wasn’t amazing either. There are so many tour groups available that I would ask friends/family or research online what is recommended. We went with Windhorse, which were fairly good and the email responses were very quick.

This was in Lhasa and was stunning, the climb up to the palace was really tiring and a lot of tours will recommend a day to acclimatise in Lhasa before doing any exploring. Some of the older tourists may bring medication with them to help increase oxygen intake into the blood but this is something you might have to enquire into when you book a tour or ask other travellers. We didn’t take any medications but for the first two days, we did have headaches in the morning which soon went.

The palace itself is pretty much located in the heart of the city and there are good places to take photos nearby, you can go to the main square and take a photo at night which is very popular (the square is literally opposite the palace but you have to enter security gates). Another popular place is near the entrance to the city called Chakpori hill. There are steps to the right which lead up to a viewpoint of higher ground, however it can get quite congested, so choose your moment carefully.

The palace was said to be the winter palace of the dalai llama, however the current dalai llama does not live in Tibet as he was exiled by the Chinese government and currently lives in India. The tour guide said there are certain features of the palace which make it special. One feature I do remember was that the windows are painted black, I think to ward off spirits but also the colour black keeps the heat in (remember your physics lessons kids), during winter periods but when it is a hot period the white colour of the temple will reflect light, keeping it cooler. The two different portions of the palace are the white palace and red palace. I would highly recommend  taking a leisurely walk up the stairs because it will leave you breathless regardless of age or physical fitness and enjoy the view.

A lot of Tibetans respect Jokhang palace as there is much history linked into it. The palace itself, is located in the city centre also. It is strange because you walk down the road and it is surrounded by shops and restaurants, the complete opposite to Potala palace where it is the palace and mainly roads and the square opposite. You have to enter Jokhang via security gates again, they were very strict and tourists from China can enter with just their ID card whereas other tourists will need to enter with their guide and visa pass. Once you enter into the palace grounds, you can walk into the palace or you can wander around. The famous Barkhor walking street is next to the palace and a popular destination to buy gifts or souvenirs. Jokhang does have a few levels but nothing as immense as Potala (which you should be thankful for!). There are some halls and also statues within the palace. The Sakyamuni Buddha is very famous and there is a relic of it inside. I remember a lot of Tibetans ventured inside and will pour yak butter, wax or place Tibetan paper money as a sign of respect.

An important tip when visiting these palaces and temples is that you should dress moderately, cover your legs and no tank tops. It can be very hot but wear lightweight clothing.

Part of the Three Great monasteries (the others being Ganden and Sera). This monastery was located outside the main city. Our tour guide allowed us to wander freely and the monastery itself was very peaceful as it was pretty much located at the bottom of a mountain. Supposedly Drepung means collecting rice in Tibetan. Drepung had some halls to explore and there was a Thanka located towards the top of the monastery which was very beautiful and massive! Sera monastery was also located outside the city and it dedicated to the Yellow Hat Buddhists. This monastery was larger than Drepung and it had a debating hall where the monks would gather and talk about Buddhist philosophy. Literally monks would be shouting and other monks would reply an answer, if they are right or wrong then the monk may slap his hand and then they would discuss the philosophy. The tour guide briefly showed us around the monastery but there wasn’t much to see, the highlight was definitely the debating hall. 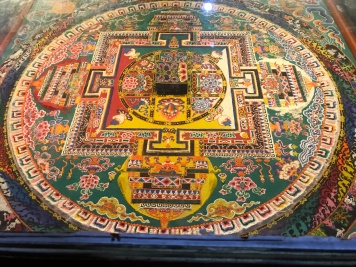 It is the sister temple to Jokhang and is said to be the second most important Buddhist temple in Tibet. Legend has it that the temple was originally built to house a Buddha statue brought by the queen of Songtsan Gampo as a dowry. The temple has similar features to the palaces and monasteries with Tibetan architecture.

Shigatse and the Holy Lakes

Towards the end of the tour, our tour guide took us to Shigatse and along the way we stopped at Yamdrok lake (the others being Namtso and Manasarovar).  The drive to yamdrok was specatacular, plenty of mountain views and terrain then you are greeted by this beautiful turquoise lake, it is literally something out of a movie. However dress warm as it was freezing at the lake and also carry some change if you wish to have a photo with a yak or Tibetan mastiff dog. The lake is a beautiful blue colour but the guide wasn’t sure what gave it this colour but I thought it may be due to the mineral content or algae in the water. We then made our way to Shigatse as most of the group were going to Everest base camp (we decided not to as we were heading back towards Nepal and India but I think it would be a good idea to visit – next time). There isn’t much to see in Shigatse but we did visit Tashilhunpo monastery which was vast and they held a traditional Tibetan show here (couldn’t understand any of it but there was a scene where one of the characters had about 10 cups of butter tea if that makes sense to any of you).

The food is very similar to Chinese cuisine and I felt that it was more northern Chinese style based as they add chilli to quite a few dishes. They also love their yak! You have to try it, it’s actually pretty tasty but the yak butter tea is an acquired taste.

We decided to have some tibetan momos, yak butter tea and yak curry. All were really fresh and my favourite was the yak curry because it was tasty and wasnt too spicy. The butter tea is definitely an acquired taste as it has a slightly salty aromatic flavour. 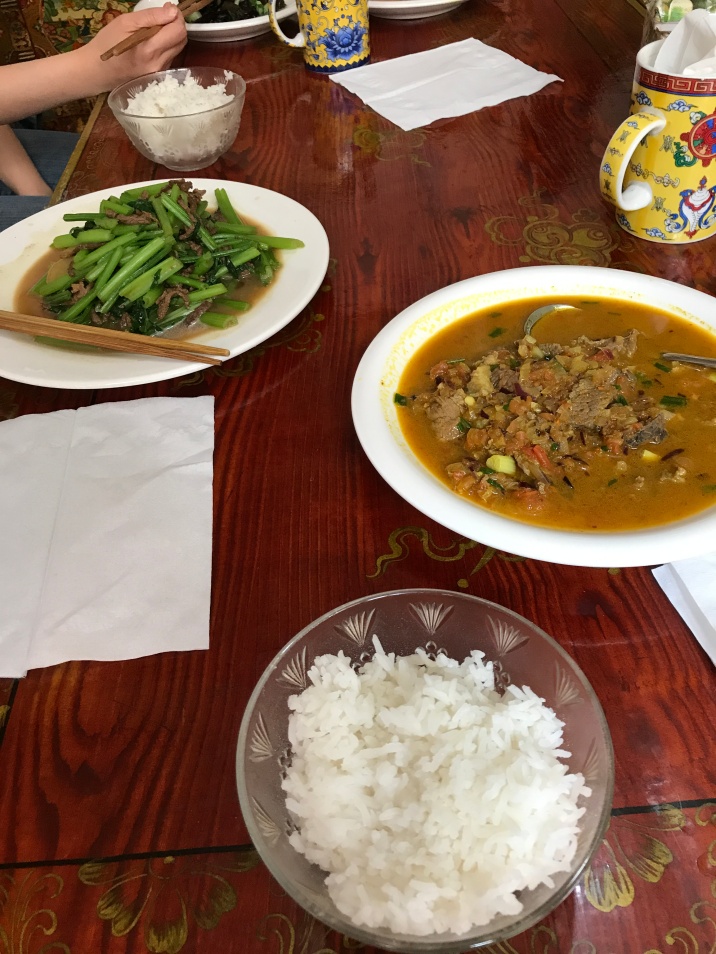