What a city San Francisco is! A lot of history blended in with culture and sites. It was founded by colonists in Spain and boomed in 1849 due to the Gold rush and continues to grow to this day due to the mass of companies and start ups that reside in the city.

When I arrived in San Fran and reached my Airbnb, I knew there was something special about this place. It has these ridiculous hills and a strange transport system but it all seems to mesh together and leaves you in awe. Although I spent only 5 days here, there is a lot to do even after you’ve seen the “main sites”.

So as you well know, I like my AirBnBs (Maybe I should’ve gone to the head office to talk about a discount card). They’re great value for money and so far they have all been cheaper than a hostel without having to share a room with 100 other people, I like meeting new people but it gets to a point where there are too many people and it just becomes basic chit-chat. However when I stayed at my Airbnb in Daly city, I had alot of fun and met some cool people.

So San Francisco is well known as being the birthplace of Silicon Valley and a lot of famous companies place their headquarters here. Naturally I managed to land a bed in an apartment full of programmers. Within an hour of getting to my AirBnb, I was out again with the host Evgeny and 4 other flatmates.

We went to a start -up party and played some ping-pong (or table tennis as I like to call it), had a go on oculus rift then went for some ramen. We finished the night off with some table football and I went to bed content that I was gonna have a good time during my stay at ZapiliMVP.

Overall I paid about £20 a night which was a bargain considering all the other places were charging a lot more.

After meeting a family friend at Powell Street station, he suggested we take the famous Cable car which has been operating since the inception of San Francisco. You can take the cable car at different stops and in different directions for a $7 one way ride. We decided to take it to Fishermans Wharf and have a famous irish coffee at Buena Vista, which was an experience as it was St. Paddys day. I mentioned that I was doing the Alcatraz tour and he said to combine Fishermans Wharf and Pier 39 on that day as Alcatraz tours leave from Pier 33 and so it would make sense to do it all in one day.

As I was stuck as to what to do, he suggested to walk along the coast and see Golden Gate bridge. He said I could even walk across it. Challenge accepted! I began to walk along the beaches and along Crissy Fields. I reached Fort point and then climbed stairs to the entrance of Golden Gate where the sign read “Weekdays open to pedestrians 9-5pm” and began the walk. It is truly amazing walking along the bridge where you can get a panoramic view of the city skyline. However if you don’t fancy walking, you can cycle down it.

As I reached Marin County on the otherside, I noticed on the left-hand side ant sized people on top of a hill and thought, that must be a great view. If you continue walking, you will reach a viewpoint on the right where a Lone sailor statue can be found and an underpass leading to the otherside of road and to a trail leading up to what San Franciscans call “Hawks Hill”. Take a hundred photos, get a drone over it, it is simple an amazing view. 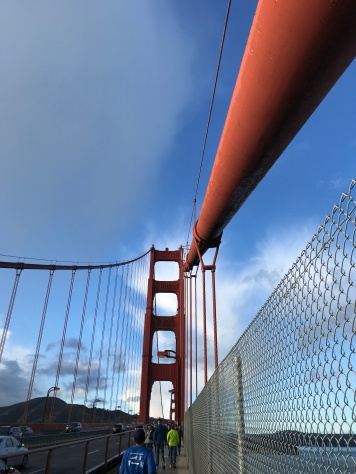 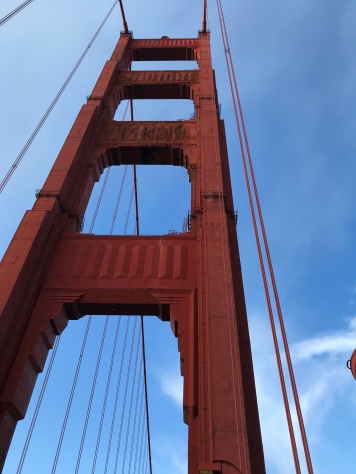 However, at night Golden Gate won’t illuminate like the Rainbow bridge in Tokyo but if you did want to see that then you can head over to Bay bridge. 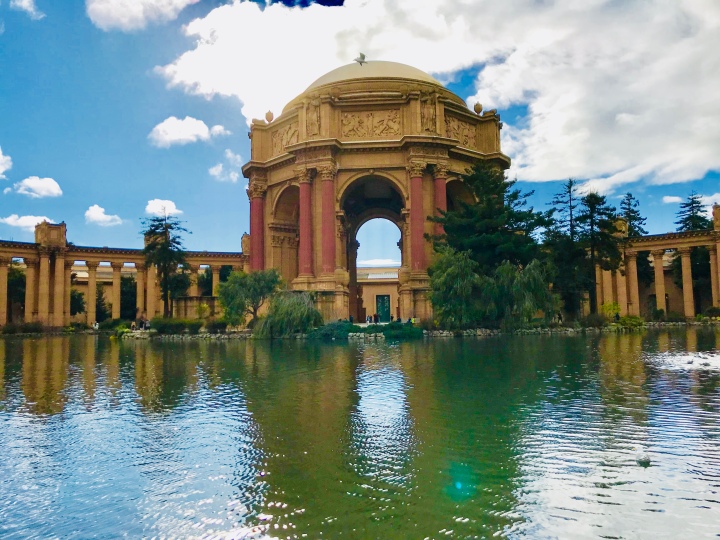 Along the way to Golden Gate bridge, you may be able to see a large domed structure on the left (if you are walking along the beach). That is the palace of Fine arts, a structure designed by Bernard Maybeck for the 1915 Panama-Pacific Expo and you will learn that the area has remained the same from its birth apart from the garden layout which has changed over time. My only regret is that I did not bring a coffee and food with me to enjoy its beauty whilst I re-energised. Please, you have to go see it and bring a beverage!

The infamous Alcatraz is a 20 minute ferry from Pier 33, you can pre-book a ticket or buy it on the day. I would recommend pre-booking as it is an extremely popular site. The ticket costs about £30 and it includes return journey and once you get to the island, a free audio tour.

Alcatraz is known for holding America’s worst of the worst criminals such as Al “Scarface” Capone, Robert “Birdman” Stroud, George “Machine gun Kelly” Barnes and Alvin “ Creepy Karpis”. Once you reach Alcatraz then there is a brief introduction and then you can free to wander, the main exhibit is the jailhouse of course, where you are provided with an excellent audio guide detailing life in the cells and famous incidents such as the Anglin brother breakout in 1962 and the riot in 1946. One of the most famous stories involves Frank Morris, John and Clarence Anglin. They reproduced wax-head models of themselves and had burrowed a hole into the walls using spoons. They escaped via raft and some experts believe they managed to survive and have lived in Brazil since. 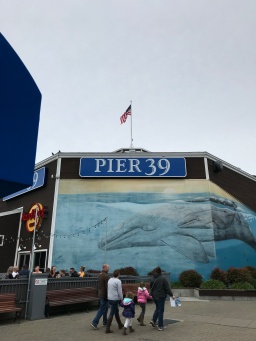 After I was back at Pier 33, I continued towards Pier 39 which looks like a theme park and has a lot of restaurants and tourist shops. I have admit, even though it was an interesting site, it seemed like a tourist trap, oh and if you’re looking for souvenirs – wait until you get to Chinatown, the prices are much better. If you continue walking then you will eventually reach the famous Fisherman’s Wharf and one of the sites I visited was the Musee Mechanique, a museum where you can play on some of the oldest coin machines in San Francisco. I was definitely amused by what they had to offer. 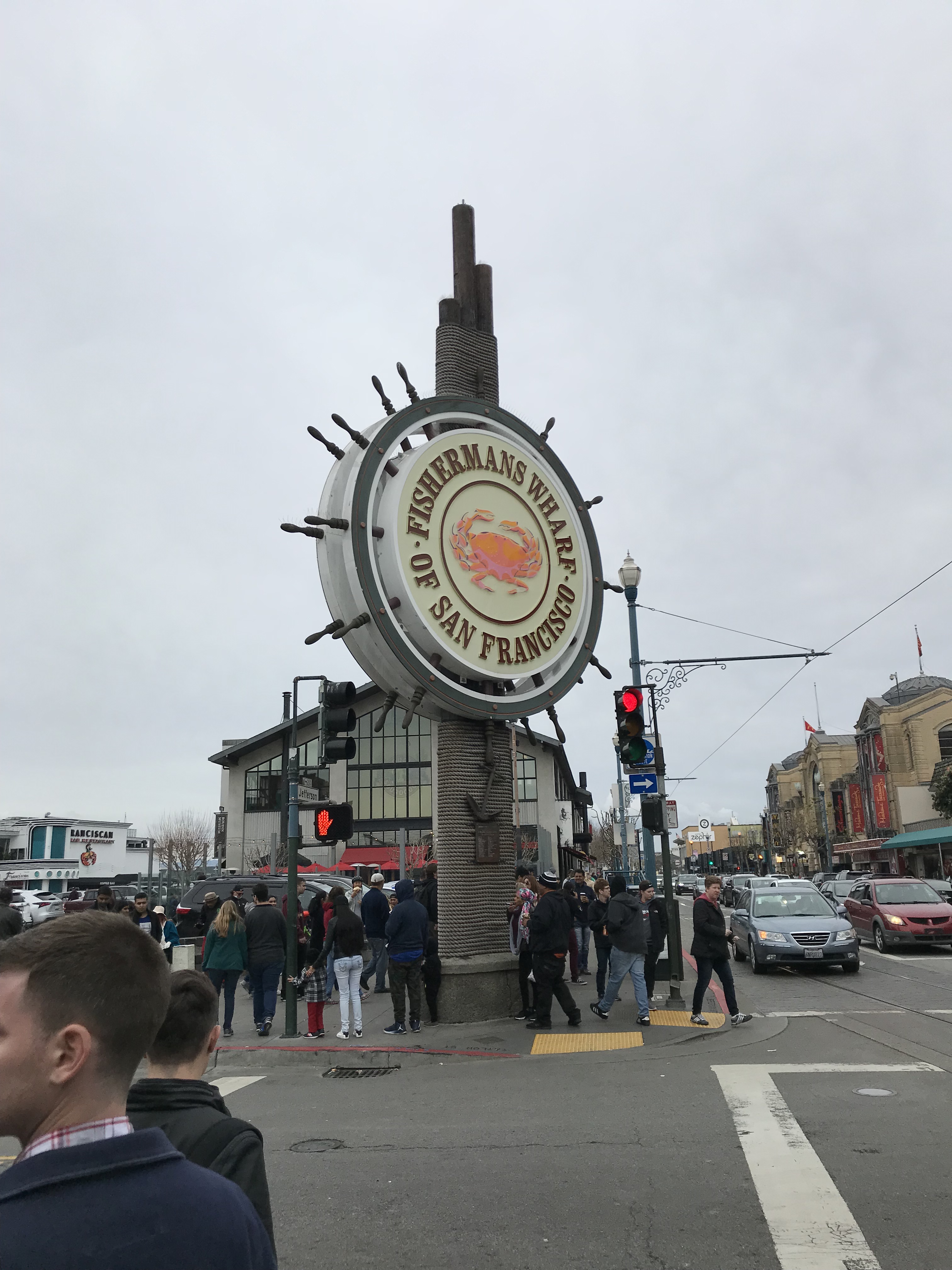 If you are hungry then you have to try out the seafood in Fishermans Wharf, hopefully you don’t have a Seafood allergy. San Franciscans say that the chowder is one of the best in the world and if you don’t fancy soup you can enjoy fresh seafood or lobster rolls, you may spend about $20 for a roll but it is packed out.

Ghiardelli Square is also located near Fishermans wharf and it is an old chocolate factory now turned shopping centre. You can buy Ghiardelli chocolate and there are also some other shops there serving food. 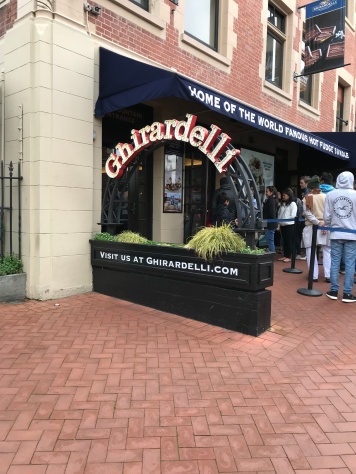 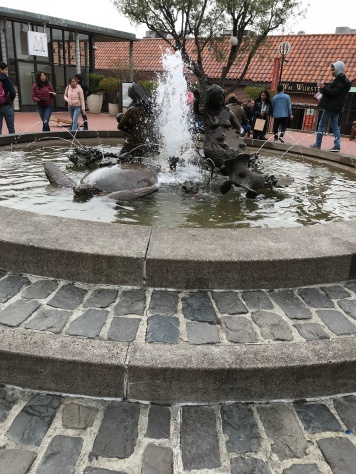 Another day you may fancy exploring Chinatown, it is vast and if you’ve ever visited Hong Kong then it will remind you of the market stalls there (or any Asian country with a night bazaar). There is a lot of street graffiti and the Chinatown stretches for a good mile or two. One of the housemates said she had a dim sum buffet for $7 in Chinatown! They offer tea tasting sessions and you can pretty much find any souvenir in this district.

If you continue walking deeper into the heart of the city then you can find yourself in Japantown, it isn’t as extensive as Chinatown but there are two components of the Nippon shopping mall which is decent enough. They have Japanese themed shops where you can eat matcha ice-cream, play arcade games or if you fancy ramen, you could try Marufuku Ramen (a top rated ramen restaurant known for Hakata style ramen).

Twin peaks is a great site to get a view over the city, you will have to hike abit but well worth it if you like having that panoramic view of the city. Another site to get a good view is Coit Tower, you spend $8 to get into the tower but you will be blessed with murals and a site of the city. It was a gift and commeration to Lillie Coit who was a wealthy socialite and donated her wealth after her death to the city of San Francisco, where they commissioned Coit Tower to be built and later on murals were painted inside the tower.

There are other districts in San Fran you can also visit like Castro – known for the birthplace of LGBT movement and Hippie movement. It is also where Harvey Milk was based and was known as one of the first gay elected officials in California.

If the weather is on your side you can also visit Golden Gate park where the academy of science, De young museum and dutch windmill is found. The de young has some interesting art pieces and worth a visit if you like that type of thing.

Another place you may want to visit is Stanford university, a world famous university whose alumni include Elon Musk, John F Kennedy, Evan Spiegel and Tiger woods! The list goes on. There are even tours of Silicon valley but I would only recommend it if you are a huge techie as people I have chatted to said the tours aren’t that great.

Another local recommended going to Santa Cruz, which is well known for its beaches and also as a surfers paradise. 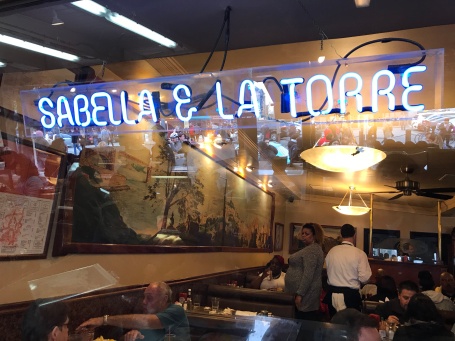 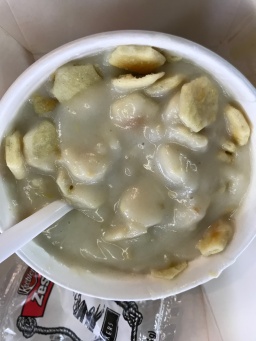 I wasn’t that adventurous here but there is too much food choice. If you want Chinese food, go to Chinatown and grab a bun at Golden Gate bakery. If you fancy ramen, go to Marufuku Ramen in Japantown. If you think you want a cheesy burrito then go to Mission street and if you want pizza, well theres plenty of pizza places. However if you fancy something thai, Burmese, afrikaan then you can find it. I settled for some famous chowder, pizza and ramen. 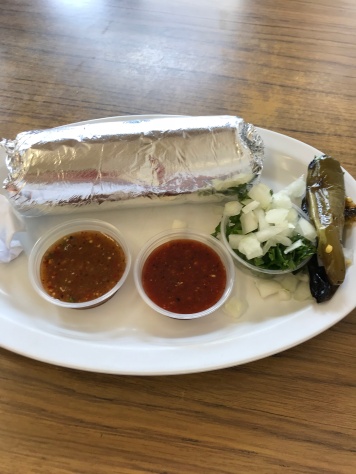 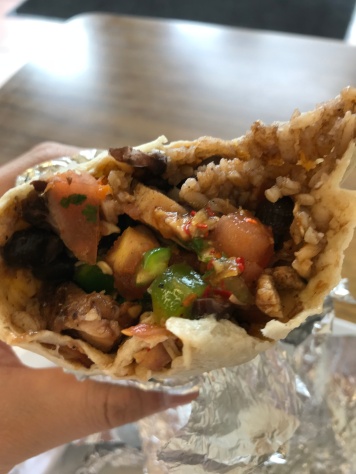 In the Castro district, you can try out alot of latino food. The food is extremely well priced as you can see I got a small burrito for $6 and it was packed out, a large burrito is $7.50 and is the size of a small baby.